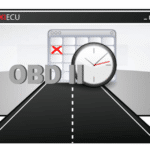 In the previous post, we mentioned that along with the implementation of the OBD 2 standard, there was also standardization of e.g. error codes. In accordance with the J2012 standard, a five-character coding system has been introduced. Probably some of you know very well how to decipher the code, but as a reminder and for those who don’t know yet:

3. The third character – a subgroup related to car systems

In addition, there are additional distinctions in the types/status of emissions-related faults that:

Let’s move on to the practical side..

Reading the code is really just the beginning. The step of determining the cause is more important, which often means checking many elements. At this stage, it is necessary to know how the various systems in the vehicle work. Knowledge in the subject of mechanics is crucial to correctly indicate the actual cause and, consequently, save yourself expenses for unnecessary replacement of components.

The controller that monitors the crankshaft and camshaft position sensor is responsible for identifying this code. Difficulties with ignition can therefore be caused by both the lack of fuel (injector), a fault in the ignition system (e.g. damaged coil, worn out spark plug), and a problem with compression in a specific cylinder.

A lean mixture is nothing more than too much air or too little fuel. First check the intake manifold for leaks, then verify pump operation and change the fuel filter. The reason for such a code may also be a faulty MAF flow meter, MAP sensor, EGR valve or coolant temperature sensor. After excluding other causes – you should look at the O2 sensor and replace the lambda probe only as a last resort.

Is it worth checking error codes?

In general, regular code reading allows you to detect problems that can potentially cause more serious damage. The advantages include the possibility of minimizing repair costs, but also – control of the actual condition of the vehicle, and thus driving safety.

Although many codes can be simply erased, it is important to remember that erasing is not a fix. There are really a lot of codes, but don’t worry – in MaxiEcu you will find the right descriptions and tips.

And also to remember – the OBD 2 standard applies only to emissions and mainly to the engine system. This is just basic diagnostics. Other systems are completely different, advanced diagnostics (and a lot of other codes specific to given manufacturers). Fortunately, our MaxiEcu provides both 🙂